On June 29th, we celebrated Bumping Down Highways pre-launch with a weekend of fun at Flamingo Lake RV Resort in Jacksonville, Florida. 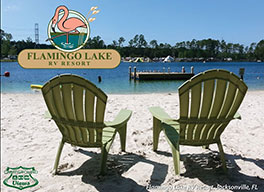 Old friends and new friends came from near and far to RV with me. The park went above and beyond making this so very special for me and the 100s who were part of it!

We enjoyed floating in the lake, campfires, pop-up jam circles, grilling, live music, karaoke at the cafe, and a fun golf cart Poker Run. We had food trucks, vendors, a caricature artist, rock painting, and the perfect photo booth (The Tin Can Photo Lounge)!

On July 2nd, I said goodbye and hit the road on my book tour in the middle of an incredible heat wave! My first stop was Rocks Pond Campground in Eutawville, SC where I am renovating a little camper on Lake Marion. My plan had been to get more renovations completed.

I lucked out when I met Karen! She had just sold her 5th wheel at Rocks Pond and was selling her golf cart. She also needed a home for all of her deck furniture! I checked those things off of my list and made a new fabulous friend!

I had a few challenges with the little camper that I did not expect and learned a few lessons.

I spent an entire day in the blazing heat trying to fix and level a busted slide out. Thanks to David for battling the heat and fire ants with me, we got 2/3 of it fixed! Jimmie rocked at keeping us hydrated! I noticed that my hot water heater was leaking at the back side of the camper.

People all around came by to help. The plastic drain plug had corroded. I shut off the water and with the help of my new friends, got the plug out. It would be the next day before I could go into town and get a new plug from Strick’s One Stop. My life wouldn’t be complete without making mistakes and a little drama… I turned the water on (for just a minute) so I could wash paint off of my hands. I got busy and forgot to turn the main water off.

When I took Emmi for a walk, I heard water running. It was like Niagara Falls coming out of my camper and I had flooded my yard as well as the neighbors!!! Though I got some work done, I spent more time fishing and visiting with friends there that have become family.

My film crew joined me to start working on a documentary and we hit the road for book signings and some fun! We met amazing people at Mt. Pleasant KOA, had fun tie dying shirts, grilling, playing guitars and eating ice cream! The film crew thought they would “tent camp”. They survived the two days of sweltering heat, but just barely! The rest of their time with me would be in my RV or rented cabins!

Then it was off to fabulous Charleston KOA and my first book store signing at Barnes and Noble. The store was 20 minutes away and The film crew was driving me. I was ready to leave an hour early. Tony (film director) backed his car up to my RV so I could load a few things, just as the bottom fell out of the sky. Baseball sized rain drops fell from the sky with a vengeance as lightning bolts crashed to the ground one right after the other!

As I stepped out, I noticed the extension cord (that was plugged in) floating in the water on the already flooded ground. I prayed that the breaker had tripped and I would not be electrocuted! We got everything loaded and drove only a few hundred yards before the air conditioner started blowing hot air and the windows fogged up. A stop at the office for paper towels would work (I wasn’t going to miss my first book store signing!). Alan (fabulous film guy) would keep the windshield clear from passenger seat on the inside, while the windshield wipers slapped furiously on the outside.

We didn’t even make it a half mile before flood waters were rushing down the road and the engine overheated! We limped back to KOA where the staff found a Lyft driver who would brave the storm. I was over a half hour late to my own book signing, but she got us there! And the Lyft driver that brought us back to the park… he was willing to wade through flood waters in his slacks & dress shoes, to unload all of my stuff at the RV!

On July 16th, after cleaning up a muddy mess, we headed north. We picked up an adorable puppy from Lakeside Rescue (Teddy) and my new friend Katie in Santee South Carolina. Our plan was to document to transport to his new forever home in New York.

Next stop was Zebulon, NC for a Mudcats baseball game and a night of boondocking in their parking lot. A little drama with a flat tire slowed us down leaving Zebulon, but Solis Tire saved the day!

Next on the tour was a few days at my favorite KOA in the country! We spent a few days at New Bern KOA making new friends, catching up with friends from past visits and even meeting up with one of my Solo RV sisters who made a stop on her way to Maine! My book signings at The Next Chapter Books and at the New Bern KOA brought me new acquaintances that will be friends for life!

I am on the road again heading further north. You can find my Book Tour Schedule on the Bumping Down Highways FB Page. Check back often because it is constantly being updated.

You should also check out some of the fun on Bumping Down Highways YouTube channel. Be sure to click subscribe and tap the little bell so you don’t miss an episode!

I hope to see you on the road!
~ Jenni Raney Edwards
Author. Adventurer. Storyteller.